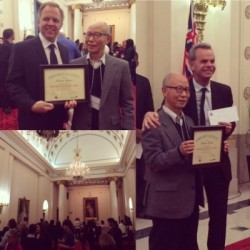 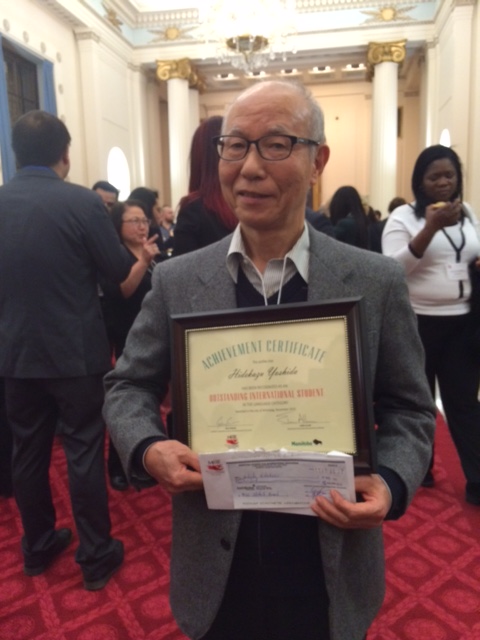 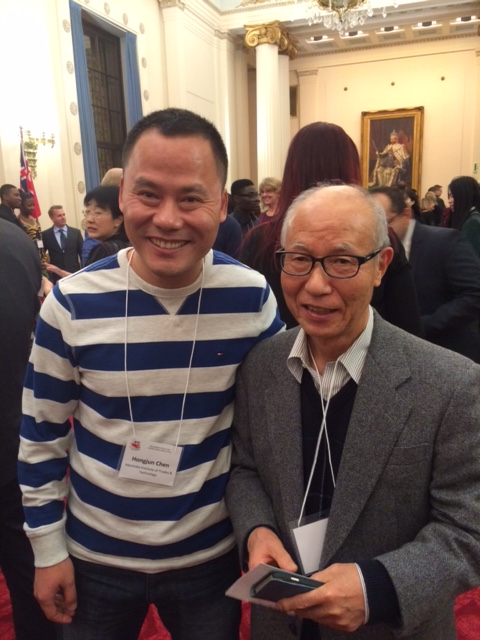 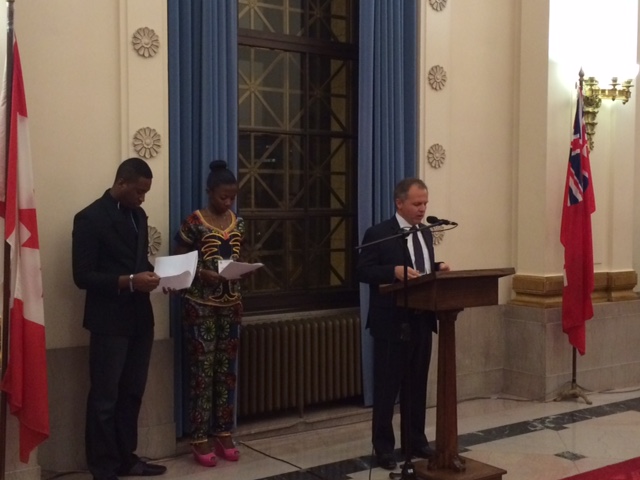 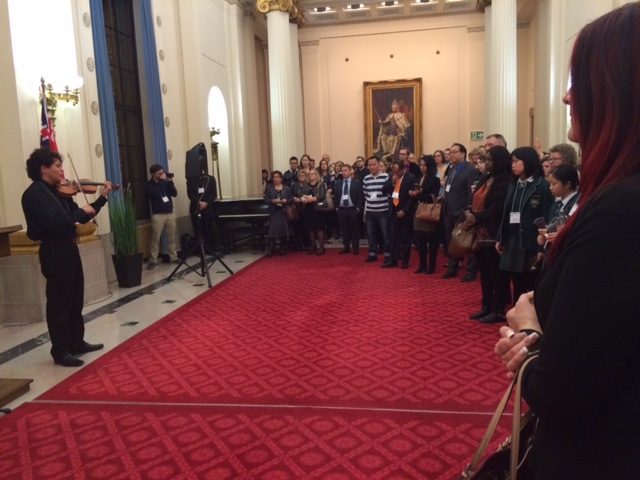 Yoshida accepted his award from James Allum, Minister of Education

In August, we welcomed Hidekazu Yoshida who came to Heartland from Japan to study English for 5 months.  He lives with a Homestay family in Winnipeg and happily comes to class every day, eager to learn.  On October 28th this year, we are excited to celebrate his birthday with him as he turns 75.

Imagine waking up in the morning, opening the door and being greeted by an impressive scene of Mount Fuji dusted in snow, silhouetted by an orange sunrise.  This is the beauty of Shizuoka, Japan where Yoshida calls home.  Leaving the mountains behind, Yoshida travelled to Canada to pursue his studies in Winnipeg.  “The city is very good,” he says, particularly enjoying the wildlife he sees near his homestay, the feeling of safety akin to Shizuoka and the 50% discounted senior’s rate on a monthly bus pass! Winnipeg also has a similar population size to Shizuoka, another big reason why Yoshida feels comfortable here in The Peg.

While at school, Yoshida enjoys the teaching style in his Advanced 1 class, and appreciates that even though it can be difficult, he is learning a lot.  Having studied English previously at a school in the United States which focused on computer based learning (something he says is not his strong suit), Yoshida prefers the interaction he has with his teachers at Heartland.  He eats lunch with his classmates every day and loves to learn more about where they have come from, what their stories are, and to share his own.  He has made a point to experience all that he can during his time in Winnipeg and attends the Friday afternoon cultural activities with his fellow students.  He was particularly fond of the Canadian Museum for Human Rights and quite impressed with the wall display timeline of human rights through history. Born in 1940 Japan, Yoshida has himself lived through many of the major historical moments featured on that wall.

Before embarking on an impressive Canadian educational journey, Yoshida worked in Tokyo as a Quality Management and Systems Control Engineer, eventually creating his own consulting company 11 years ago.  He is still running his own company and has also become the Vice-President of a manufacturing company which benefited from his consulting services.  An ambitious life-long learner, Yoshida isn’t finished yet.  He plans to pursue a program in management once he improves his English language levels.  Ideally, he wants to learn Canadian management and business models here in Manitoba and to bring the practices back to his businesses in Japan.

“After coming to school, I forget my age,” Yoshida says, explaining the age difference between him and his classmates isn’t a concern, “If another student can do it, I can do it too.” Yoshida is a remarkable example of what all of us in education believe, you are never too old to learn something new, and at Heartland we are grateful that Yoshida agrees.

A few words from Yoshida regarding what he likes about living and learning in Manitoba:

“Before I came here, I didn’t know Winnipeg.  I wanted to study English more and my agent said [Winnipeg] is a good city and Heartland is a good school.” Yoshida likes that in Winnipeg the bus is very convenient; his homestay is nice and quiet and a good place for him to see the Canadian Geese, rabbits and squirrels, all things that he enjoys about Manitoba.

Now in the Advanced 1 class and starting his IELTS test preparation, Yoshida believes there are three things in particular that make Heartland a great place to learn English: